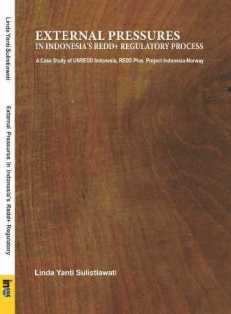 Indonesia is pressured by external actors to reduce its emissions. REDD+ (Reducing Emission from Forest Degradation and Deforestation) means: placing a value on the role that forests play in saving the earth’s climate. This book investigates the driving forces of Indonesian agencies in making REDD+ regulations and how REDD+ donor projects, as external pressure, influence Indonesia’s regulatory process.Indonesian agencies’ involvement and ownership of the regulatory process and the influence of REDD+ donor projects are studied.

The hypothesis of this book is that the regulatory processes in the agencies are influenced by external pressures through ownership and involvement in the projects. The higher the ownership and involvement of the agencies in the projects, the more active their regulatory process will be.This book’s research employs 2 case studies, using data collection and in-depth interviews. The independent variable of this research is ‘external pressure’, measured by: conditionality of funding, decision making process, and monitoring activities.

The dependent variable of this research is ‘ownership and involvement of regulatory process’ measured by: bureaucratic change endured, time, money and human resources dedicated for these projects by the agencies. Results from this research depict the inner workings of the administrative legal process of Indonesia. Indonesia holds the 3rd largest tropical forest and 4th most populous country in the world, so it is important for the world to know how Indonesia controls deforestation in order to avoid forest degradation.