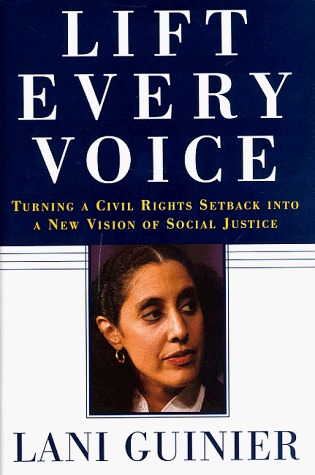 The result was a civil rights setback of monumental proportions.Now, in this remarkable and important book, at once a memoir and insiders account of what really happened behind the closed doors of the Oval Office, the Justice Department, and the U.S.

Senate, and an insightful look at the past, present, and future of civil rights in America, Lani Guinier at last breaks her silence.Unsparing of her own mistakes and shrewdly perceptive about the overt and hidden agendas of those who opposed her, Professor Guinier shows how the president promptly abandoned his ambitious agenda for civil rights at the first hint of criticism from the media and Congress-- and how the civil rights movement suffered a major setback as a result.More important, this book, in Professor Guiniers own words, is about the battles fought in the belief that our racial history and our commitment to equality and democracy are essential parts of the same story.

It has not always been a pretty story, nor one that follows an inevitable path.This book is not, however, an effort to settle scores. Its a story of the efforts of men and women who believe fundamentally in the promise of the American creed and who act on that belief in their everyday lives. These are people whose lives are without notoriety or fame, but in whose willingness to take risks we see the honor of real heroism.Above all, Guinier goes on to describe how her experience at the hands of the press, the White House, and her congressional enemies has given her both a new voice and a renewed faith in the ongoing struggle for civil rights.

Her book is an extraordinary account of just how the civil rights movement acquired its strength, drawn from the courage of ordinary people standing up against fearful odds for what was right, and from the commitment to make change happen from the bottom up, relying on the wisdom and common sense of those at grassroots level.

Using her own nomination as a symbolic point of reference, she shows just how weak and divided the cause of civil rights has become, as its leaders have all too often been silenced by the very people they should be challenging.Finally, she explains, in her own words, the truth about her political ideas-- which are rooted in democracy and its principles, not in quotas and affirmative action-- and examines the state of current race relations. Renewing her call for a national conversation on the issue of civil rights and social justice, this thought-provoking book is certain to spark a new and much-needed debate.

Comments
Comments for "Lift Every Voice: Turning a Civil Rights Setback Into a New Vision of Social Justice":