Riding on the Wind Martin Beresford 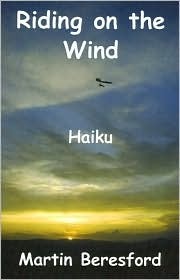 Riding on the Wind is a collection of 100 English language haiku. The author, an active hang glider pilot, captures a wide range of haiku-like experiences, from childhood in England during World War II, through his army service, to more recent times living in Europe, Hong Kong, Japan and California. The haiku in this book follow traditional haiku conventions regarding scanning, seasonal references, and the essentially Zen-like nature of the haiku experience. The poems are grouped broadly according to the four seasons, with a separate section relating to World War II, and a few longer poems included at the end of the book.

The latter were written nearly fifty years ago. They are a young man’s poems, and touch on some of the fundamental issues underlying the deep poignancy that is expressed – albeit more obliquely – in some of the best haiku.

Comments
Comments for "Riding on the Wind":